Until recently, good queer content was rare, whether in television or on YouTube, but a sudden surge in onscreen LGBTQ representation ensured that this list was hard to make. 2018 had innumerable magnificent videos that displayed queer lives in all its form, variety and glory and here are a few of the best (according to us) that we’ve compiled:

Lesbian Jesus Hayley Kiyoko who coined the term “Twenty-Gay-Teen” started off the year on a good note with the release of this video in early January kicking it off with some sapphic goodness. Two lovers compete for each other’s attention in this passionate video that keeps the viewers on the edge of their seats with the thought of “Will they or won’t they?”. The music’s good, there’s a cute love story between a queer woman and her “straight” pal who likes doing gay stuff with her. Sounds familiar?

One of the most visually artistic videos featuring transgender people this year, James released this in a display of his artivism for the LGBTQ community. The gay singer is spotlighted in the video along with intimate moments between a couple who express their longing for each other. The video is absolutely stunning and the ballad itself tugs at the listeners’ heartstrings. 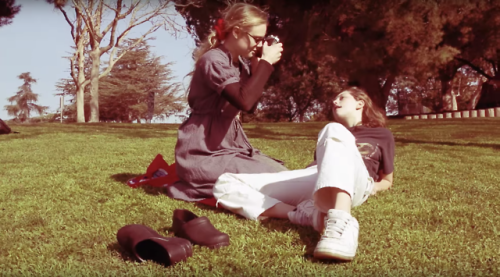 1950 is King Princess’ debut single that went viral after Harry Styles tweeted one of its lyrics. The video portrays the happy moments experienced by a same-sex couple and the aftermath of the break-up faced by King Princess. During an interview, she revealed the intention behind the music video: “Queer love was only able to exist privately for a long time, expressed in society through coded art forms. I wrote this song as a story of unrequited love in my own life, doing my best to acknowledge and pay homage to that part of history.”

The young openly bisexual actor shot to fame in 2018’s break-out hit “Love, Simon” and it turns out that he sings too..really well! His soft voice interspersed with a montage of gay relationships makes the adorable video worth watching. It also reminds you that “if you wanna kiss the boy, you better kiss the boy right now.”

This video has Alex G assuring her parents or whoever’s watching that just because she is coming out of the closet, it does not mean she’s changed or that anyone who comes out does. The heart-wrenching video depicts her at various stages of her life, starting with cute baby videos. It is a song of liberation where she finally asserts her sexuality and has no need to “pray it away”, which is a helpful reminder to all the fans and viewers out there that are still struggling with their own sexualities.

5. Come Over – The Internet

The catchy R&B song features a sapphic relationship and is not only goofy but also hilarious. Syd croons come over to her lover repeatedly in the chorus while dancing to the music. It also shows each member of the band with their own partners in brightly coloured clothes. This video is a reminder of the small rare pockets of happiness that still exist on the “Internet.”

2018 was the year when Spanish music came to the forefront of pop music, as a result of “Despacito”. “Baby” is a product of this Latino wave and a song with English and Spanish bits. The video is particularly adorable, depicting an f/f relationship at summer camp until they’re split up. It is divided into flashbacks and the present with the singer/lover asking her lover to come back before she becomes someone else’s ‘baby’. The bright colours in the video, the slick Spanish music as well as the nostalgic memories of past relationships that the video brings with it, make it an item on this list.

#20GAYTEEN brought about a highly coveted collaboration between Lesbian Jesus – Hayley and bisexual icon – Kehlani. Hayley, who has been applauded for showing pure, unadulterated lesbian relationships in her music videos continues the trend with this one. Kehlani and Hayley play best friends in love with each other who go on a road trip. Their acting convincingly sells the story and draws emotions from the viewers too. It even features a kiss between the two pop stars. This summer banger, along with the video, was an absolute fan favourite and will engage you till the very end.

Janelle Monae made headlines several times this year, for her radical music album, her alleged relationship with actress Tessa Thomspon, and the reveal of her pansexuality. “Pynk” was one of those radical music videos, where everything is in various shades of pink and the women are dressed in ‘vagina’ costumes. It even features said girlfriend whose head is in place of a very important body part of women. As reputed mag NYLON wrote, “Pynk” is “a celebration of pussy power and femme identity”. Both the self-love anthem and the video are defiant and empowering.

1. Only You – Little Mix, Cheat Codes

Set to beat bopping music by girl band Little Mix and DJ trio Cheat Codes, “Only You” is a surprise addition to the list. It is mainly about a lonely girl who finds herself in another girl at yet another boring party, a la Alessia Cara’s “Here”. There is a twist to their love story, I shall not reveal it, but it is sure to surprise viewers. The only fault with the video is that it takes the much-hated ‘bury your gays’ trope and runs with it. Apart from that, it is a wonderful watch destined to warm your heart. It is one of the purest depictions of love between two women among the music videos of 2018 and depicts queer lives without enforcing a heteronormative gaze.

Among Korea’s first music video about lesbians, Tenny’s 159 cm received a lot of flak and amassed a variety of reactions from Korean netizens when it was released earlier this year. The music video set in 1980s’ Korea, shows the love story of two girls whose relationship is opposed by their parents and explores the hypocrisy embedded in society. The song itself is something you would want to listen to during those late night somber moments. The video has a perfect twist in the end that will leave you longing for your loved one (…or make you feel extra single).

Did you enjoy reading this listicle? Then check this out: 6 Video Games That Create A Queer Virtual Reality